ComedyinSpain are delighted to bring yet another Edinburgh Award Winner to Spain, the only...
PHIL NICHOL - Too Much
BUY PHIL NICHOL TICKETS NOW!! 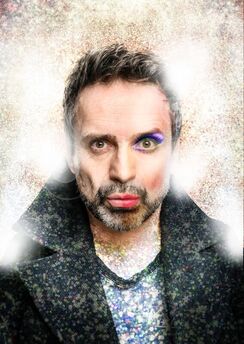 WHEN: Saturday January 25 - 20.30h (Doors 20h)
WHERE: -  c/ Fontrodona 35, Poble Sec Barcelona
Metro: Parallel
​TICKETS: €15 ant - €18 on the door
(IVA and booking incl)
​
The only way to EXPERIENCE a Phil Nichol show is up close and personal and his latest show entitled ‘Too Much’ in Barcelona's newest intimate comedy venue Mau Mau. will certainly offer the full Nichol! This is yet another blistering show from arguably the most intense storyteller in the game and follows an incredible two-year run with his last offering ‘Your Wrong’ that toured across the UK, Europe, SE Asia, Canada and New Zealand.
​
‘Too Much’ follows the rollercoaster ride of Phil’s hilarious relationship with the modern world. And what a confounding, hilarious and messed up world it is. It’s too much.
The planet is messed up, society has devolved, mankind is hopeless, vegans are right, you aren’t supposed to punch facists, the left are self-righteous morons, everyone is a selfish prick, Phil’s a bleeding hypocrite. It’s all too much. Too much.

Ask yourself this, what kind of person ends up-
-Naked on The Weakest Link?
-Taking two 75 year olds to Glastonbury?
-Arrested for quoting Derek and Clive on a Virgin Train?
-High on Ecstasy in the back of a police car in Lancaster?
-Surviving a Rocket attack in Kandahar, Afghanistan?
-With his nose broken by a Royal Marine in Thailand?
-Listening to his 90 year old mom tell him how madly in love with his father she is?
​
Phil Nichol. That’s who.
​
‘Too Much’ takes an unflinching look at aging, recognition, mental health, values, norms, patience, love, everything and conkers. Expect riotously uncomfortable anecdotes and oversharing delivered in Nichol's unique live-wire style.

“This Fringe I’m performing two comedy shows and a classic play every day. Too Much. I’ve written 23 solo hours for the Fringe. Too Much. I’ve won or been nominated for 25 awards including 2018 Best Touring Show (Scottish Comedy Awards 2018) Too Much.
I have over 1034 total stars over the twenty three years of stand-up and 33 years of total comedy that I have performed. Too Much. And still I’m worried that no one will like me. It just all Too Much.” -Phil Nichol 2019

Phil Nichol has been seen on TV in Catastrophe (C4), Uncle (BBC), Man Down (C4),  Siblings (BBC3) and playing Terry Gilliam in BBC4's BAFTA nominated Holy Flying Circus. He has starred alongside Christian Slater in One Flew over the Cuckoo's Nest, Boy George in Taboo, Bill Bailey in the fringe hit Twelve Angry Men and initiated the stand out character of Hugo, a middle aged drag queen, in the original West End production of Everybody’s Talking About Jamie’ at the Apollo Theatre.

He has won numerous performance awards including the 2005 Stage Award for Acting Excellence (The Zoo Story), the 2006 Edinburgh Comedy Award (The Naked Racist) and most recently a Scotsman Fringe First for the monologue Somewhere Beneath It All, A Small Fire Burns Still (2011).
I'VE HEARD ENOUGH GIVE ME THE TICKETS!!
THE CRITICS on Phil:
Read this 5 star review of Too Much from Edinburgh 2019

'Nichol is a beast on stage" - Edfestmag
“…the sheer energy he exudes in the forceful, sweat-drenched performance pumps life into any audience.”  - CHORTLE ****
“.. not just comedy but soul-quenching storytelling at its finest.” - EDINBURGH FESTIVAL MAG  *****
“..Phil’s unique show sizzles with energy and passion… a thrilling hour of hilarity which has a real heavy metal thunder about it, a sound that is unique.”  - NEW EUROPEAN *****
“…a sweaty, high-octane hour filled with vitriolic diatribes against modern society, religion and any other number of targets – but with a more caring, inclusive message at its centre - THE WEE REVIEW ****
​