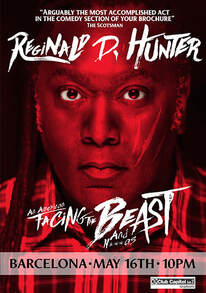 We are so happy to have found a replacement date for this show which was originally cancelled back in November due to the rioting which made Pl Urquinaona it's ground zero and sales and production went a bit awry. We had almost 200 people signed up for that gigs, there was real disappointment when we reluctantly cancelled and so we are so glad to be able to make sure Reg makes his long awaited return to Barcelona.

The gig will move to Club Capitol Sala 2 on Las Ramblas which is smaller than Borras so we absolutely expect a sell out...
​recommendation as ever is to grab those tickets early!!!
BUY REGINALD D, HUNTER TICKETS NOW!!!
Reginald’s searingly honest material has garnered him a popular fan base that spans the generations. He is one of the few performers to have been nominated for the highly coveted main Perrier Award in three consecutive years. His appearances on television have included Have I Got News For You, 8 Out Of 10 Cats Does Countdown and the hugely popular BBC2 series Reginald D Hunter’s Songs Of The South and its equally successful follow up Reginald D Hunter’s Songs Of The Border, both of which documented the growth of American popular song.

After twenty years of gifted storytelling and effortless dark humour, Reginald D Hunter is bringing his highly anticipated new show to Barcelona. This Evening with... will showcase Reg at his honest, controversial and hilarious best.
​
“He has the audience in the palm of his hand”
- Edinburgh Festivals Magazine