Our History reads as a who's who of the biggest live acts in the industry. Our involvement in production right across Spain and the Balearics, testing and developing live comedy shows while providing unequalled corporate solutions for almost 15 years.
We are the original one stop shop for live comedy production consultancy in Spain and we are always open to new project development.
​Contact via mail@comedyinspain.com

2004: The very first international professional english language comedy show takes place a 'Best Of Irish Special' featuring Eddie Bannon and Bendan Dempsey as part of 1st edition of El Feile Barcelona's Irish festival. It took place in the face of and to spite! the turmoil of the tragic fallout from the Madrid M11 bombings of that year. Some of that audience would attend every ComedyinSpain showright to the present day!

2009: Official International launch of Festival Internacional de Comedia de Barcelona at Ed Fringe supported by our own ComedyinSpain production - Four Comics, Juan Vision with it's very own short film... 5th Giggling Guiri season programme would include Marcel Lucont, Pete Johanson  and in November the 2nd FIC BCN would feature another Logan Murray Workshop and be headlined by the Jason (Byrne) and Adam (Hills) show onstage at the same time!! while the multilingual programme featured shows in Swedish, Dutch, Spanish and Catalan.

2010: would see us programme the comedy tent in Benicassim for the first time... while the GG would continue its programming with Alun Cochrane, Simon Munnery, Kevin Bridges, Stephen Grant and Janey Godley, Jimeoin, Steve Hughes would all thread the GG boards before we would have the biggest festival to date featuring the mysterious disappearance of Seann Walsh, yet another Logan Murray Workshop, Andrew Maxwell, a special Marcel Lucont's Cabaret Fantastique featuring all FIC '10 international guest comics. 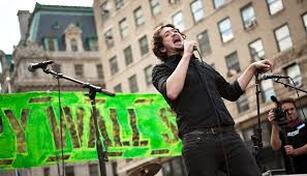 2011: While the 'crisis continues to bite the Giggling Guiri shows must go on with memorable shows from Patrick Monahan fresh from his £100,000 win on TV show 'Show me the Funny'.
Lee Camp champion of the Occupy movement in the US brought his brilliant satire at a highly politically charged moment. His first of 2 visits with ComedyinSpain
Others to grace the GG stages that year included the fantastic Zoe Lyons and Irish/American legend Des Bishop and the legend that was Howard Marks makes his first of 2 appearances!! 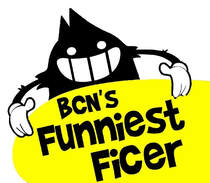 2012: Our final Benicassim, Giggling Guiri performances from the likes of Dave Fulton, Jimeoin and Nick Doody continued but the fruits of our Logan Murray Workshops at the now annual Barcelona Comedy Festival showed our commitment to nurturing new local talent that would lead to the 1st Funniest FICer competition. It became and continues be the premier English language comedy competition in Spain. The first edition was won by a local catalan act fresh from the workshop Josep Català.
The competition is still the annual focus for the constantly developing Barcelona grassroots comedy scene.

2013: A massive moment as we bring the Funniest FICer to Madrid and it is won by Archie Bezos who would subsequently go on to represent Spain in the Laugh factory's inaugural 'Funniest Person in the world' competition. He qualified through the heats in Hollywood and came 5th in the final in Las Vegas Baby!!
​Janey Godley and Nick Doody make returns to Spain

2014: The beginning of our relationship with the comedy behemoth that is Eddie Izzard as he first broaches the idea of transforming his show Force Majeure into his 4th language, Spanish!  It began with a toe dipping 6 shows and a weeks immersion in the Spanish capital, he left with a vow to return...
later that year Reggie D Hunter sells out Teatro Alfil with a storming show!
​Mr Nice returns to bring his show back for a  Madrid debut.to for the many in Barcelona who missed his 2011 due to the fastest selling show  we've put on in Spain. Other comics visited including Tony Law and Marcus Brigstocke!

2015: Long time pursuit the legendary Dylan Moran brought his latest globe trotting masterpiece to Madrid, Barcelona and a new first as Comedy in Spain announces its arrival 'down saff' with a show in Malaga and new plans for brand www.comedydelsol.com.
Other highlights included New Yorker Danny Lobell's recording his latest comedy album as part of FIC BCN'15

2016:  A memory ultimately tinged with great sadness as the late great Sean Hughes, a comic who we had developed a great relationship with, gave an awesome and so memorable performance in June in Marbella.
2016 had begun with 2 legends of UK's seminal 80's alternative comedy scene with a double header of Simon Munnery and Nick Revell coupled with Sean it was a year for legends!

The irrepressible Eddie Izzard makes good on his promise to return and finish what he started back in 2014 and starting in November '16 he becomes the ultimate headliner for the world's only multilingual comedy festival as part of FIC'16, We help deliver what will ultimately be another 35 small venue shows through to February 2017 when he delivers his goal of a full hour of comedy in Spanish! 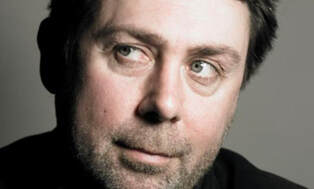 10 November 1965 – 16 October 2017
2017: With the amazing 45 Izzard shows completed, things take a more serious tone on the health front as ComedyinSpain's glorious leader's (GG) health continues on a downward spiral and facing a 'no treatment no cure prognosis' he joins a 2 year waiting list for a non FDA approved Stem cell therapy in Russia... so in August an Edinburgh Fringe fundraising show called The Pre-Disposed accompanied by the great and good of comedy friends made over the years... and the self fulfilling prophecy of the last years of 'The annual never going to happen again festival' looks a real possibility...September a real reason for hope as GG gets bumped up the waiting list for the Russian treatment alas... October, the 16th sees the gutting, passing of our great friend Sean Hughes... November, what feels like finally the FIC-ing farewell as Terry Alderton closes the 9th FIC with a blistering performance... as days later the GG heads for Russia! 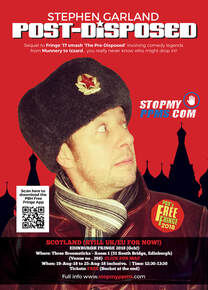 2018: Thanks to the great Russian Dr F. the GG with a brand new immune system a return to the Fringe with a new show Post-Disposed to tell the tale and the future of 'The annual never going to happen again festival' looks assured as the 10th edition FIC '19 is launched by the hottest young act in comedy Daniel Sloss who shows just why all the excitement and reason for his 2 Netflix Specials.

It goes on to be a memorable edition with the legendary Tom Stade headlining and the versatile bilingual Trevor Lock offering workshops and shows in both english and Spanish and the most exciting BCN's Funniest FICer in years... The crisis may finally have abated... 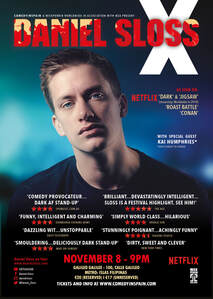 2019:  Dylan Moran becomes the latest 'biggest selling show ever in Spain' as almost 1500 comedy fans flock to see his latest offering Dr Cosmos...
with Madrid scheduled to get a first taste of the brilliant Daniel Sloss on November 8th in Galileo Galilee and FIC'19 programming certain to throw up the usual brilliant blend of local grassroots with the biggest names from international comedy!!
By December 2019 the 'X' tour ran. 18 months. 40 countries. 277 shows. 1 HBO special was an honour to bring to Spain twice what will undoubtedly be the next superstar of comedy, last thing he said in Barajas was he'd love to come back next year!
​We will certainly be seeking to make that happen! 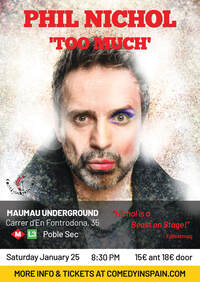 2020: We storm into Comedyinspain's 16th year with the legendary 'Force of Nature' that is GG favourite Phil Nichol with followed by a gig in Valencia in collaboration with Barcelona's the Agency to bring Jim Gaffigan to Spain's third largest city.
Plans were in place to bring Reginald D. Hunter for a long awaited return to Barcelona and The Blindboy Live Podcast his live podcast Spanish debut.
We had a brand new Summer season club planned with partners for Barcelona then on Friday March 13th!!!! the entertainment world fell off a cliff-edge and quickly Spain announced the very first of it's now infamous Estado de Alarmas... 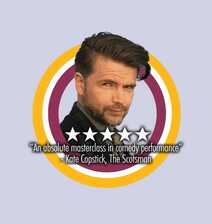 2021: the ravaged entertainment world entered it's second of 'The Covid Years' but as soon as the conditions eased in late 2020 Barcelona's English language comedy scene had already emerged and were creating shows across the city as the reduced capacities venues could allow. It is notable that the city's small comedy rooms were probably the most active across all of Europe as the pandemic wore on and kudos to Spanish Health system really did an amazing job throughout the darkest days.
By mid 2021, capacities had increased to such a level that we were able to plan a 13th edition of Barcelona's Comedy festival. It included a really competitive Funniest FICer competition and the constantly innovating Trevor Lock brought a couple of his latest singular creation 'We are who we are' and delivered both the shows in both English and Castellano!
Ireland was at a different stage of the pandemic opening up and it unfortunately didn't come quick enough for Blindboy to take the headline of the festival but that long awaited debut is fully on for May 2022! 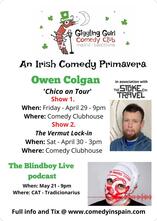 2022: And so the final SOOOO long anticipated debut dates of The Blindboy Live Podcast will finally take place this May in both Barcelona and Madrid and to get us back in the comedy groove to celebrate the 20th year since the GG himself, first rocked up in the Cuidad Condal we decided to welcome a very long awaited summer of '22 with an 'Irish Comedy Primavera'.
Legendary Irish 'Hardy Buck' and latest Irish stand up sensation Owen Colgan who along with his latest show will be the very first GG Comedy 'Vermut Hour show' to get Irish taste buds attuned for those Blindboy shows in May.
Planning is already in place for remarkably the 14th Barcelona Comedy Festival.
On we keep on, keeping!!
There will as always be some more very exciting announcements as we move forward through the year....
​make sure you're subscribed to your relevant newsletter to be the first to know
We currently have live comedy projects in ongoing development in Barcelona, Madrid, Costa Del Sol and Valencia....